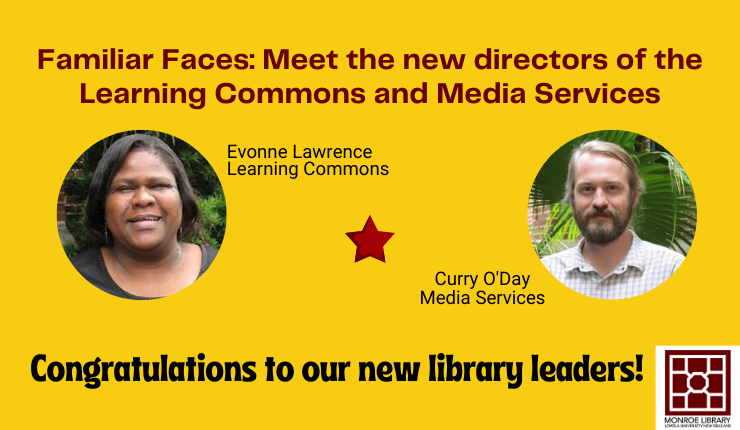 The library began this year energized by the promotion of two key staff members to leadership positions, a move by Interim Dean Laurie Phillips that promises to extend the library’s momentum as it looks to transition into a post-pandemic landscape. By placing trusted staff who went above and beyond during the pandemic, Dean Phillips has ensured that Monroe Library is poised not only to offer the same outstanding service and support to the Loyola community but also to move forward with leadership that has a deep understanding of the university and the Loyola community’s evolving needs.

In case you didn’t know Evonne or Curry…

Though she was born in Georgia, Evonne Lawrence maintains that she is a New Orleanian through and through. “Just check the accent!” she says. Evonne began as a member of the custodial staff at the university and was responsible for maintaining the facilities throughout the entire building of the old library, which used to stand in the place currently dedicated to house the new Benson Center. She had been working there for several years when an intervention by the then-head of circulation set her on a path that changed her life.

Seeing Evonne help a pregnant staffer every morning by starting up the library’s computers and helping with opening procedures, the then-head of circulation, Tru, knew there was something special about Evonne. She encouraged Evonne to get her GED. Evonne remembers her saying, “If you can figure out how to do all this, what are you doing mopping the floor?” With the help of daily math tutoring, Evonne passed the test handily. And when a circulation staffer left not soon thereafter, she moved from being custodial staff to working at the library’s circulation desk. Over the years, she’s earned multiple promotions, in addition to completing her associate’s degree at Loyola. Quite fittingly, her latest promotion to Learning Commons Director has placed Evonne at the helm of the library desk that she’s helped to run for much of her career.

She credits her intellectual curiosity as being the key to her professional success. She elaborates further, saying, “Any type of machine they brought in, I always wanted to know what it did. And that’s just my curious mind… I don’t understand people who have equipment around them and don’t know how to work it.”

Though her love of learning has helped her continue achieving, her love of Loyola’s students drives her dedication to her job, a job that has her directly mentoring dozens of students every year, many of whom are working their first jobs at the library’s Learning Commons desk. About this part of her work, she says, “I want to see them do well… and I can pull a student in and say… ‘what’s going on -- you don’t look happy today.’” She emphasizes that “it’s always been the students for [her].”

Also born in Georgia, Curry O'Day took an indirect route to his position as Director of Media Services. As an undergraduate at Rhodes College in Memphis, he majored in philosophy but paired his love of contemplation and the liberal arts with a keen interest in computers. Just like Evonne, he credits his personal and professional growth with his intellectual curiosity: “I have meaningful work here... and I’m also teaching a course during J-Term, so it’s the best of both worlds.”

After coming to New Orleans to join his wife, a Loyola alumna from Slidell, Curry fell in love with their new city immediately. He vividly remembers exiting the I-10 and driving through the Carrollton neighborhood. “I remember being completely blown away by the trees and the streetcar. I had heard about New Orleans, but I’d never been here,” he recalls.

In New Orleans, Curry worked first as a computer technician and later took a position providing AV support in Tulane’s language labs. Looking back on his work there, he explains, “We had some smart classrooms and some projector carts, so that was my first entry into AV as opposed to just computers.” After moving away from the city to pursue graduate work in philosophy at Texas A&M, he helped develop videos and other multimedia content for instructional use in large classes. But he wouldn’t stay away from New Orleans for long.

Soon after his wife accepted a position at Tulane, Curry brought his technological expertise to Loyola, and he had just gotten his bearings when, six months after he was hired, the pandemic hit. Indeed, Curry’s knowledge and energy was pivotal in helping establish the core of classrooms that made hyflex teaching (and, indeed, the entire 2020-2021 academic year) possible.

Following the retirement of the former Media Services Director, Susan Brower, Curry sees himself still involved with day-to-day operations at the ground level. And, like Evonne once again, he loves working with students, both as a supervisor of student workers and by integrating distance technology into classrooms. Though he looks forward to directing new initiatives for educational technology, such as the reinvigoration of the Faculty Innovation Lab, he still enjoys hands-on work at the one-on-one level.

Monroe Library is so excited to incorporate the new energy and new ideas of these two exemplary staffers, both of whom attribute their success to their own need to always be learning and trying new things. One final thing they have in common: both profess a strong preference for king cake from Randazzo’s Bakery.