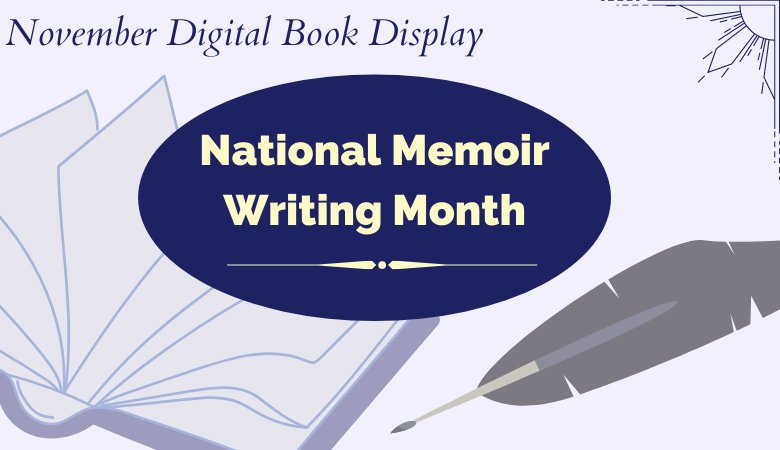 November is National Memoir Writing Month! Though some have said that it’s a distinctly modern form, life writing’s roots can be traced back to antiquity. Most notable are St. Augustine’s Confessions and Julius Ceasar’s account of his conquest of the Germanic tribes in the first century BCE. Though saints’ lives, diaries, letters, and political memoirs can be found fairly far back in history, it wasn’t until the modern era that autobiography proper came into being. The earliest instance of the term occurred at the end of the eighteenth century, according to the Oxford English Dictionary.

Since then, as a genre, it has been influential in its power to bear witness. For example, the narratives of enslaved people were essential to creating support for the abolitionist movement. A growing interest in the human psyche and a turn toward the internal lives of people during the early-to-mid nineteenth century brought forth a rich literature whose most recent peak came with the memoir boom of the 1990s. Since then, it has remained a robust, democratic genre that gives voice to the experiences of people of all kinds.

It’s a genre that asks us to take interest in others -- their memories, thoughts, and inner struggles. It can also give us a window onto individual experiences of some very external conditions of struggle. In this display, you’ll find memoirs by musicians, political prisoners, enslaved people, serfs, environmentalists, saints, and immigrants, among others. We can think of reading autobiography as just one way to embody the Jesuit value of being persons with and for others, which can also lead to another pillar of a Jesuit education -- that of being contemplative in our actions toward others. Take a look through the display carousel for just a small glimpse at what our ebook collection contains of autobiography and other life writing genres.

All of the books in this display can be accessed without contact, in the convenience of your home, by clicking on the Electronic Access field located in each item’s catalog entry.

Jean-Dominique Bauby, an editor-in-chief of Elle magazine, wrote a memoir after suffering a traumatic stroke that left him completely paralyzed. He composed the narrative in his head and communicated it to scribes using a special system. By blinking his one functioning eyelid, he spelled out each word of the book. Le Scaphandre et le Papillon -- The Butterfly and the Diving Bell -- became an international bestseller. Bauby died just two days after its publication.