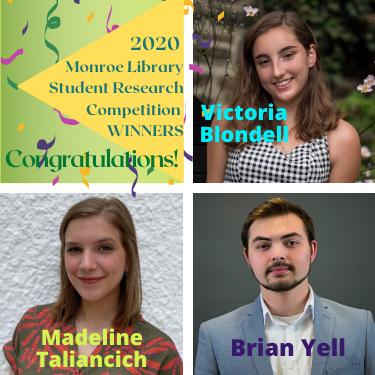 The Monroe Library faculty is pleased to announce the winners of 2020’s Student Research Competition, which recognizes outstanding research projects completed by Loyola students during the previous calendar year. We are always impressed and intrigued by the inquisitiveness and sophistication of the submissions, and this year was no different. All entries presented nuanced, engaging research topics that led to illuminating projects. However, our winners all excelled in their ability to identify high-quality, relevant sources and use those sources effectively to advance inquiry into their projects’ most crucial questions. This year, three students’ projects were selected for recognition based on their successful integration of library resources and on the students’ reflections on the role that research played in their projects.

Freshman Victoria Blondell’s paper, written for Prof. Jason Ezell’s first-year seminar (Beyond Stonewall: U.S. Gay Liberation), examined William Friedkin’s 1970 film, The Boys in the Band. Arguing that it was an early yet nuanced depiction of a diverse gay community characterized by a spectrum of different identities, Blondell used her research to historically contextualize the film both as a cultural artifact and to locate it within a larger filmic discourse on marginalized sexualities in the U.S. Commenting on one of Monroe Library’s primary source databases, Blondell emphasized the importance of the Gale Archives of Sexuality and Gender, which allowed her “to explore different primary sources … to gain better, direct insight into the historical context of the time period.”

Sophomore Madeline Taliancich’s paper for Prof. Laura Hope’s Irish Nationalism and Theater class read Gerald MacNamara’s play Tir-na-n-Og as an ambivalent critique of essentialist Irish nationalism as a mutable ideological construct. Her research provided a framework for understanding the historical roots of the troubles in Ireland as well as the material and political contexts of theatrical production in different Irish counties. For Taliancich, both interlibrary loan (ILLiad) and the library’s many databases proved pivotal for advancing the project. She credits time spent looking through databases with developing her “ability to discern helpful articles from ones that simply mentioned the topic.”

Senior Brian Yell’s final thesis, supervised by Profs. Kathleen Murphy and Elin Grissom, “used applied sociological and psychological theories of self-concept and identity exploration, as well as the music therapy method of therapeutic songwriting.” His project’s experimental design was supported by a fully researched and well-written literature review, suggesting Brian’s outstanding preparation for continued work in his field. Yell says of the library’s digital resources: “[they] allowed me to narrow my search results to exclude irrelevant articles, books, and journals, which helped me become less overwhelmed while conducting the research for my proposal.”

Congratulations to this year’s winners!